Tasted kimchee for the first time 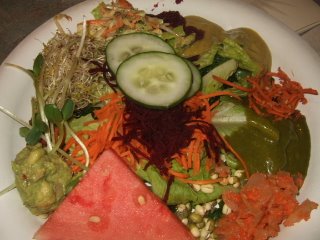 I went to the Go Raw Cafe again, this time to their other location, which has a salad bar. I was very proud of myself for skipping the more caloric menu items and going for the simple salad instead. I didn't need anything other than a salad, really, because I had just had a slice of that pie Felicia made yesterday. (I liked the pie even better the second time around, maybe because the flavors had "married," as my dad, another natural chef, would say). Anyway, the salad bar presented me with a way to try new foods without having to pay for an entire container at the store. I therefore made it a point to try kimchee, a new kind of slaw, sprouted adzuki beans, seasoned grated beets, and two kinds of salad dressing, along with the normal lettuces, carrot and tomatoes.

First of all, kimchee? Wow! powerful stuff. There's a blast of flavor in a tiny bit of it. For those of you who don't know, kimchee (or kimchi) is made up of fermented chile peppers and cabbage (and/or other vegetables). It's a source of probiotics, which I'm trying to learn more about. The sprouted beans, which include lentils and adzuki, were soft but crisp, a real surprise. They were not bitter as I had expected from past experience. I guess sprouting really does take some of the bitterness away. The beets were- well, beety. I don't like beets and I always remember why after I taste them! But they are good for you and so I ate the little that I got. The seasoned beets were a bit better to my palate, but they were still beets.

The green salad dressings were interesting. I poured a little of each along the side of the plate instead of over the salad, just in case. Turns out I liked only one of them, to be honest. But I find I really don't need dressings on my salads anymore. Since going raw, a little cold pressed olive oil and some fresh squeezed lime make the perfect dressing- and sometimes I don't even bother with the olive oil. The cabbage slaw was all right- maybe something Chef Felicia could try making at home and tweaking until it suits us. It would definitely be a welcome addition to our menu. I know that some veteran raw foodists say that over time your desire for raw restaurant fare diminishes, but for the newbie, raw restaurants offer a plethora of ideas for meals, and allows taste-testing so that you can decide what you want without wasting a lot of money. A new raw foodist lucky enough to have access to local raw restaurants and raw potlucks is a lucky raw foodist indeed.

This is a topic of interest to me, so I've put in a forum about it at the Raw Odyssey Cafe. If you haven't registered at the Cafe or even poked around there yet, please drop on by. If you also happen to know about probiotics, you are invited to share what you know and have experienced from them, good, bad or neutral. The exact link to the Probiotics section is Raw Odyssey Cafe --> Health & Nutrition --> Probiotics If you are interested in registering, you will see the registration link below the probiotics topic.